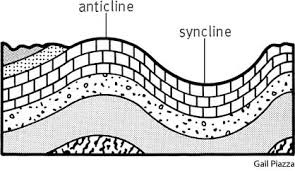 Anticline and Syncline are the up and down folds that usually occur together and are caused by compressional stress. 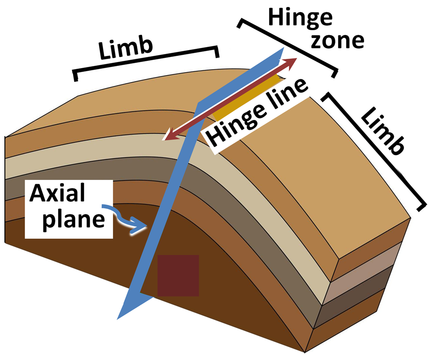 - Antiform can be used to describe any fold that is convex up
- It is the relative ages of the rock strata that separate anticlines from antiforms.
- The hinge of an anticline refers to the location where the curvature is greatest, also called the crest.The hinge is also the highest point on a stratum along the top of the fold. The culmination also refers to the highest point along any geologic structure.
- The limbs are the sides of the fold that display less curvature.
- The inflection point is the area on the limbs where the curvature changes direction.The axial surface is an imaginary plane connecting the hinge of each layer of rock stratum through the cross section of an anticline.

Anticlines, structural domes, fault zones and stratigraphic traps are very favorable locations for oil and natural gas drilling. About 80 percent of the world’s petroleum has been found in anticlinal traps. The low density of petroleum causes oil to buoyantly migrate out of its source rock and upward toward the surface until it is trapped and stored in reservoir rock such as sandstone or porous limestone.

The oil becomes trapped along with water and natural gas by a caprock that is made up of impermeable barrier such as an impermeable stratum or fault zone. Examples of low-permeability seals that contain the hydrocarbons, oil and gas, in the ground include shale, limestone, sandstone, and even salt domes. The actual type of stratum does not matter as long as it has low permeability.

Water, minerals and specific rock strata such as limestone found inside anticlines are also extracted and commercialized. Lastly, ancient fossils are often found in anticlines and are used for paleontological research or harvested into products to be sold.

​
In Middle East oilfields, large, upright folds occur in thick, competent limestones which extend for many kilometres; fracturing along the crests of the anticlines increases permeability in the reservoir rocks
​

4. North America: Anticlines can have a major effect on the local geomorphy and Economy of the regions in which they occur. One example of this is the El Dorado anticline in Kansas. The anticline was first tapped into for its petroleum in 1918. Soon after the site became a very prosperous area for entrepreneurs following World War I and the rapid popularization of motor vehicle. By 1995 the El Dorado oil fields had produced 300 million barrels of oil.The central Kansas uplift is an antiform composed of several small anticlines that have collectively produced more than 2.5 million barrels of oil.

Another notable anticline is the Tierra Amarilla anticline in San Ysidro, New Mexico. This is a popular hiking and biking site because of the great biodiversity, geologic beauty and paleontological resources.

​This plunging anticline is made up of Petrified Forest mudstones and sandstone and its caprock is made of Pleistocene and Holocene travertine. The anticline contains springs that deposit carbon dioxide travertine that help to contribute to the rich diversity of microorganisms. This area also contains remains of fossils and ancient plants from the Jurassic period that are sometimes exposed through geological erosion.

Synclines are folds in which each half of the fold dips toward the trough of the fold or can say in another word that synclines-downfolded forms, results in younger rocks becoming enclosed within older strata.
- A synclinorium is a large syncline with superimposed smaller folds
​
​

On a geologic map, synclines are recognized as a sequence of rock layers that grow progressively younger, followed by the youngest layer at the fold's center or hinge, and by a reverse sequence of the same rock layers on the opposite side of the hinge. If the fold pattern is circular or elongate circular the structure is a basin. Folds typically form during crustal deformation as the result of compression that accompanies orogenic mountain building. 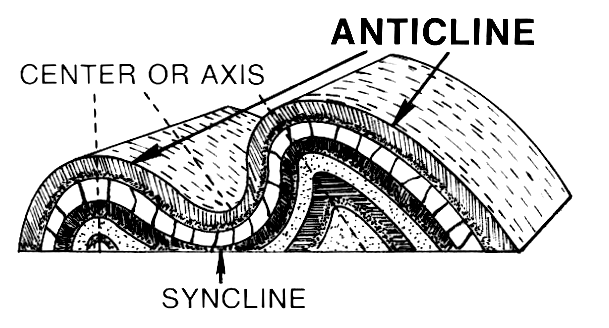 Salt dome, largely subsurface geologic structure that consists of a vertical cylinder of salt (including halite and other evaporites) 1 km (0.6 mile) or more in diameter, embedded in horizontal or inclined strata. In the broadest sense, the term includes both the core of salt and the strata that surround and are “domed” by the core. Similar geologic structures in which salt is the main component are salt pillows and salt walls, which are related genetically to salt domes, and salt anticlines, which are essentially folded rocks pierced by upward migrating salt. Other material, such as gypsum and shale, form the cores of similar geologic structures, and all such structures, including salt domes, are known as diapiric structures, or diapirs, from the Greek word diapeirein, “to pierce.” The embedded material in all instances appears to have pierced surrounding rocks. Upward flow is believed to have been caused by the following: gravity forces, in situations where relatively light rocks are overlain by relatively heavy rocks and the light rocks rise like cream to the surface; tectonic (earth-deformation) forces, in situations where mobile material (not necessarily lighter) is literally squeezed by lateral stress through less mobile material; or a combination of both gravity and tectonic forces.
Salt domes are one of a number of kinds of salt structures whose interrelationships are shown diagrammatically “Classic” salt domes develop directly from bedded salt by gravitational stress alone. Salt domes also may develop from salt walls and salt anticlines, however. In the latter case, the development of the domes results from superposition of gravitational stress on salt masses that initially developed due to tectonic stress.

A salt dome consists of a core of salt and an envelope of surrounding strata. In some areas, the core may contain “cap rock” and “sheath” in addition to salt.
The size of typical salt domes (including cap rock and sheath) varies considerably. In most cases, the diameter is a kilometre or more and may range up to more than 10 km. The typical salt dome is at least 2 km high (in the subsurface), and some are known to be higher than 10 km.
The cores of salt domes of the North American Gulf Coast consist virtually of pure halite (sodium chloride) with minor amounts of anhydrite (calcium sulfate) and traces of other minerals. Layers of white pure halite are interbedded with layers of black halite and anhydrite. German salt dome cores contain halite, sylvite, and other potash minerals. In Iranian salt domes, halite is mixed with anhydrite and marl (argillaceous limestone) and large blocks of limestone and igneous rock.
The interbedded salt–anhydrite and salt–potash layers are complexly folded; folds are vertical and more complex at the outer edge of the salt. In German domes, when relative age of the internal layers can be deciphered, older material is generally in the centre of the salt mass and younger at the edges. Study of halite grains in some Gulf Coast salt domes indicates a complex pattern of orientation that varies both vertically and horizontally in the domes. Mineral grains in the centre of a Caspian salt dome are vertical; those at its edge are horizontal.

In general, salt structures associated with folds have been linked with the same forces that caused the folding. Salt structures in areas without any apparent folding, however, puzzled early geologists and gave rise to a bewildering series of hypotheses. It is now generally agreed that salt structures (and diapiric or piercement structures) develop as the result of gravitational forces, tectonic forces, or some combination of these forces, at the same time or with one force following the other. Whatever the precise circumstance, development of diapiric structures requires a rock that flows.
Although rock flow is difficult to visualize because of slow rates of movement, its results can be clearly seen: stonework that sags, mine and tunnel openings that flow shut, and glaciers of rock salt that move down mountainsides with all the features of glaciers of ice. Given very long periods of time and the relatively high temperature and pressure due to depth of burial, considerable movement of a relatively plastic material such as salt can result. A movement of one millimetre (0.039 inch) a year, for example, over a period of 1,000,000 years would produce a net movement of 1,000 m. The most common rocks that flow are halite, sylvite, gypsum, and high-pressure shale. These rocks also have densities that are lower than consolidated rock such as sandstone, and if buried by sandstone they would be gravitationally unstable. All of them are deposited by normal processes of sedimentation and are widespread in sedimentary strata.
Study of models and natural salt structures have led to a reconstruction of the sequence of events in the development of salt domes (shown in Figure 2). First, thick salt is deposited and buried by denser sedimentary strata. The salt and overlying strata become unstable and salt begins to flow from an undeformed bed to a rounded salt pillow. Flow continues into the centre of the pillow, doming the overlying strata; at the same time the area from which the salt flowed subsides, forming a rim syncline. The strata overlying the salt, because they are literally spread apart, are subject to tension, and fractures (faults) develop. Eventually, the salt breaks through the centre of the domed area, giving rise to a plug-shaped salt mass in the centre of domed, upturned, and pierced strata. Upward growth of the salt continues apace with deposition of additional strata, and the salt mass tends to maintain its position at or near the surface. If the salt supply to the growing dome is exhausted during growth, development ceases at whatever stage the dome has reached, and the dome is buried.

Salt structures develop in any sedimentary basin in which thick salt deposits were later covered with thick sedimentary strata or tectonically deformed or both. With the exception of the shield areas, salt structures are widespread. By their very nature, the classic salt domes generated by gravitational instability alone are limited to areas that have not been subject to significant tectonic stress. Some salt domes do, however, occur in regions that were subject to tectonic stress. Three of the many areas of salt structures in the world are representative of all; these are the Gulf of Mexico region of North America, the North German–North Sea area of Europe, and the Iraq–Iran–Arabian Peninsula of the Middle East

Salt domes make excellent traps for hydrocarbons because surrounding sedimentary strata are domed upward and blocked off. Major accumulations of oil and natural gas are associated with domes in the United States, Mexico, the North Sea, Germany, and Romania. In the Gulf Coastal Plain of Texas and Louisiana, salt domes will be a significant source of hydrocarbons for some years to come. Huge supplies of oil have been found in salt dome areas off the coast of Louisiana. Some individual salt domes in this region are believed to have reserves of more than 500,000,000 barrels of oil. Salt domes in northern Germany have produced oil for many years. Exploration for salt dome oil in the North Sea has extended production offshore.
The cap rock of shallow salt domes in the Gulf Coast contains large quantities of elemental sulfur. Salt domes are major sources of salt and potash in the Gulf Coast and Germany; halite and sylvite are extracted from domes by underground mining and by brine recovery.
Salt domes have also been utilized for underground storage of liquefied propane gas. Storage “bottles” are made by drilling into the salt and then forming a cavity by subsequent solution. Such cavities, because of their impermeability, also have been considered as sites for disposal of radioactive wastes.
Definitions:
Let's take a break and enjoying gaming zone