Behavior of a reservoir fluid during production is determined by
the shape of its phase diagram and the position of its critical point.
​This make each reservoirs have theirs phase diagrams.
You can see the topics below which are involved with this topic
Non-conventional fluids
Types of conventional fluids
​1. BLACK OIL OR LOW-SHRINKAGE OIL
2. VOLATILE OIL OR HIGH-SHRINKAGE OIL
3. GAS CONDENSATE OR RETROGRADE GAS
4. WET GAS
5. DRY GAS
1. Black Oil or Low-Shrinkage Oil
- Initial producing gas-oil ratios of 2,000 scf/STB or less
- The stock-tank oil usually will have a gravity below 45 degree API
- Black oil color is very dark, often black, sometimes with a greenish cast, or brown 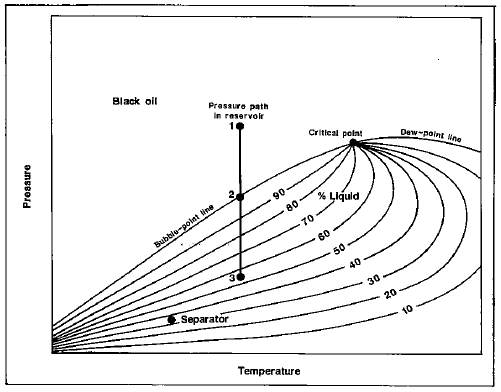 Properties of black oil from phase diagram
​Black oils consist of a wide variety of chemical species including large, heavy, nonvolatile molecules.
The phase diagram predictably covers a wide range of temperature and pressure.
The lines within the phase envelope represent constant liquid volume, measured as percent of total volume.
At reservoir condition from 1-3, pressure drop at constant temperature and the gas present when the pressure drop below the second point.
​After the second point, gas will release to form a free gas in reservoir.
When the pressure below to the surface pressure at separator, the black oil will present.
2. Volatile Oil or High-Shrinkage Oil
- Initial producing gas-oil ratios between 2,000 and 3,300 scf/STB
- The stock-tank oil gravity is usually 40 degree API or higher
- Volatile oil color is usually brown, orange, or sometimes green 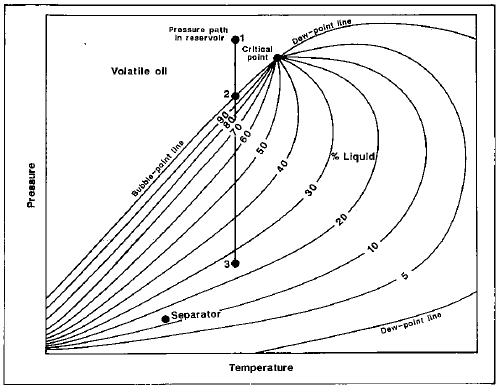 ​Properties of Volatile oil from phase diagram
​Volatile oils contain relatively fewer heavy molecules and more intermediates (defined as ethane through hexanes) than black oils.
The critical temperature is much lower than for a black oil and, in face, is close to reservoir temperature.
At reservoir condition from 1-3, pressure drop at constant temperature and a small reduction in pressure
below second point causes the release of a large amount of gas in the reservoir.
A volatile oil may become as much as 50 percent gas in the reservoir at only a few hundred psi below the bubble point pressure.
​At the separator condition, percent of liquid is lower than gas at reservoir conditions.
3. Gas Condensate or Retrograde Gas
- Initial producing gas-oil ratios is approximately between 3,300 to 150,000 scf/STB
- The stock-tank oil gravities are between 40 degree API to 60 degree API
- Retrograde gas color is usually have lightly colored, brown, orange, greenish, or water-white 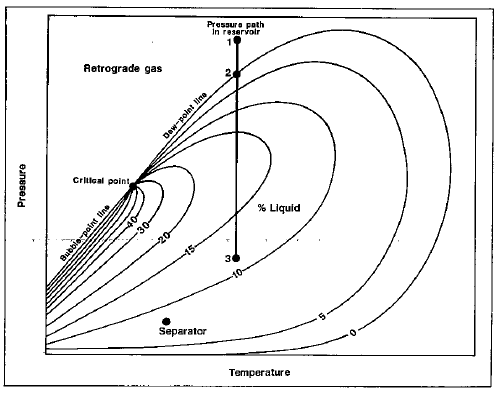 ​Properties of Retrograde gas from phase diagram
​The retrograde gas is contained fewer of the heavy hydrocarbons than the oil.
The phase diagram of a retrograde gas is somewhat smaller than that for oils,
and the critical point is further down the left side of the envelope.
Initially, the retrograde gas is totally gas in the reservoir.
As reservoir pressure decreases, the retrograde gas exhibits a dew point at second point.
When the pressure is reduced below the dew point, liquid condenses from gas to liquid in reservoir.
​At separator, percent of liquid is lower than gas at reservoir conditions.
4. Wet Gas
- Initial producing gas-oil ratios is more than 100 Mscf/STB
- The stock-tank oil gravities are approximately 60 degree API
- Wet gas color is colorless gas with small amount of clear or straw-colored liquid 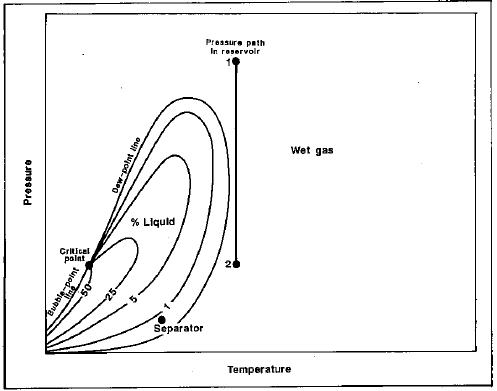 Properties of Wet gas from phase diagram
The entire phase diagram of a hydrocarbon mixture of predominately smaller molecules will lie below reservoir temperature.
Wet gas in the reservoir from 1-2, no liquid is formed in the reservoir.
​But in the separator at third point, there is some liquid formed at the surface.
5. Dry Gas
- Dry gas has no liquid in reservoir and surface
- Wet gas color is colorless gas 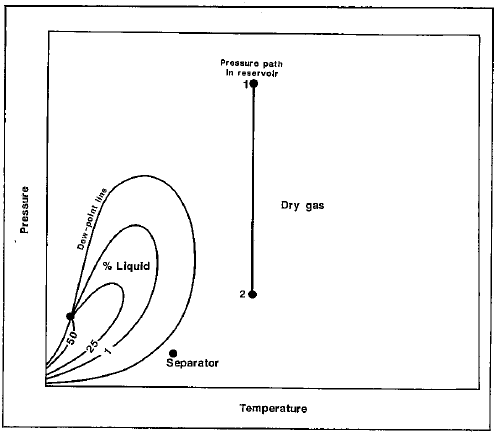 Properties of Dry gas from phase diagram
Dry gas is primarily methane with some intermediates.
The hydrocarbon mixture is solely gas in the reservoir and that normal surface separator conditions fall outside the phase envelope.
​All condition both in reservoir and separator, no liquid is formed.
Fluid Properties Video
Reference
The Properties of Petroleum Fluids, 2nd Ed. by ​William D. McCain, Jr. 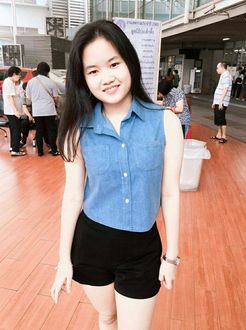