Environmental Impact of the Petroleum Industry

Drilling
During drilling, a drilling mud is continuously circulated between the well and the
platform through a ‘riser pipe’. Mud is used to maintain well pressure and wall stability, to cool
and lubricate the drill bit and to carry the rock chips (cuttings) generated during the drilling
process away from the cutting head to the platform. Here, the cuttings are partially cleaned and
the majority of drill mud re-used. Muds come in a variety of forms, dependent on their fluid base.
Amongst these are water based muds (WBM) and oil based muds (OBM). In the past, the bulk
of cleaned OBM cuttings were discharged to the seabed along with their residual oily mud
contamination. Extensive monitoring studies showed that this caused changes to the seabed via
a combination of smothering, organic enrichment and toxicity effects. These were seen to be
most severe close to discharging platforms where the ‘pile proper’ formed, but they commonly
extended up to a distance of 1 or 2 km. These discharges are no longer allowed.

Production
During production, large amounts of produced water (PW) are recovered with the
hydrocarbons. This is cleaned to very stringent standards and some is re-injected to maintain
reservoir pressure. The bulk, however, has traditionally been discharged to sea. As fields age
and as the amounts of oil remaining fall, the amounts of PW increase. The turn of the millennium
marked the time of maximum recovery of oil in the UK North Sea fields. So although the levels of
oil in produced water are very low, and despite improvements in technology which have tended
to reduce them, the overall total amount of oil discharged with the water by UK industry will
continue to rise in the next few years; it will then tail off as the industry declines. Increased
regulatory attention is therefore being focussed on the PW discharge, not least because in
addition to oil, it contains residues of naturally occurring heavy metals and radionuclides and oil
field chemicals.

Environmental hazards of petroleum refineries
Refineries are generally considered a major source of pollutants in areas where they are
located and are regulated by a number of environmental laws related to air, land and water.
Some of the regulations that affect the refining industry include the Clean Air Act, the Clean
Water Act, the Safe Drinking Water Act, CERCLA (i.e. Superfund: Comprehensive Environmental
Response, Compensation, and Liability Act), Emergency Planning and Community Right-to-
Know (EPCRA), OSHA (Occupational Safety & Health Administration), TSCA (Toxic Substances
Control Act), Oil Pollution Act and Spill Prevention Control and Countermeasure Plans. Here is a
breakdown of the air, water, and soil hazards posed by refineries:

• Air pollution hazards :
Petroleum refineries are a major source of hazardous and toxic air pollutants
such as BTEX compounds (benzene, toluene, ethylbenzene, and xylene). They are also
a major source of criteria air pollutants: particulate matter (PM), nitrogen oxides (〖NO〗_x),
carbon monoxide (CO), hydrogen sulfide (H_2 S), and sulfur dioxide (〖SO〗_2). Refineries
also release less toxic hydrocarbons such as natural gas (methane) and other light
volatile fuels and oils. Some of the chemicals released are known or suspected cancer-causing
agents, responsible for developmental and reproductive problems. They may
also aggravate certain respiratory conditions such as childhood asthma. Along with the
possible health effects from exposure to these chemicals, these chemicals may cause
worry and fear among residents of surrounding communities. Air emissions can come
from a number of sources within a petroleum refinery including: equipment leaks (from
valves or other devices); high-temperature combustion processes in the actual burning
of fuels for electricity generation; the heating of steam and process fluids; and the
transfer of products. Many thousands of pounds of these pollutants are typically emitted
into the environment over the course of a year through normal emissions, fugitive
releases, accidental releases, or plant upsets. The combination of volatile hydrocarbons
and oxides of nitrogen also contribute to ozone formation, one of the most important air
pollution problems in the United States. 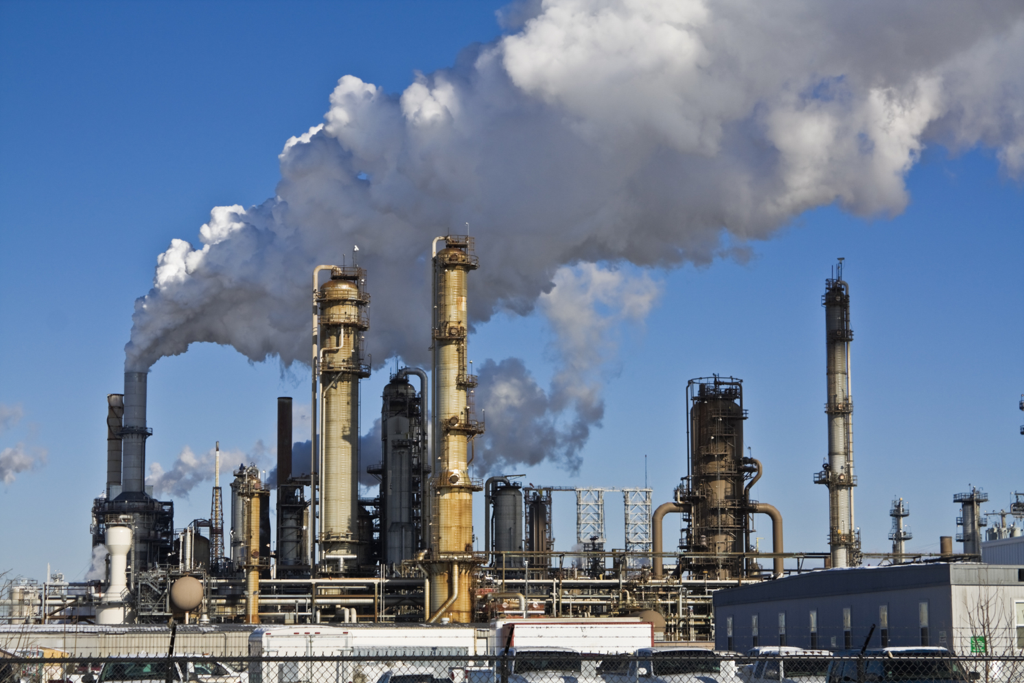 Water pollution hazards :
Refineries are also potential major contributors to ground water and surface
water contamination. Some refineries use deep-injection wells to dispose of wastewater
generated inside the plants, and some of these wastes end up in aquifers and
groundwater. These wastes are then regulated under the Safe Drinking Water Act
(SDWA). Wastewater in refineries may be highly contaminated given the number of
sources it can come into contact with during the refinery process (such as equipment
leaks and spills and the desalting of crude oil). This contaminated water may be process
wastewaters from desalting, water from cooling towers, stormwater, distillation, or
cracking. It may contain oil residuals and many other hazardous wastes. This water is
recycled through many stages during the refining process and goes through several
treatment processes, including a wastewater treatment plant, before being released into
surface waters. The wastes discharged into surface waters are subject to state
discharge regulations and are regulated under the Clean Water Act (CWA). These
discharge guidelines limit the amounts of sulfides, ammonia, suspended solids and
other compounds that may be present in the wastewater. Although these guidelines are
in place, sometimes significant contamination from past discharges may remain in
surface water bodies.

• Soil pollution hazards :
Contamination of soils from the refining processes is generally a less significant
problem when compared to contamination of air and water. Past production practices
may have led to spills on the refinery property that now need to be cleaned up. Natural
bacteria that may use the petroleum products as food are often effective at cleaning up
petroleum spills and leaks compared to many other pollutants. Many residuals are
produced during the refining processes, and some of them are recycled through other
stages in the process. Other residuals are collected and disposed of in landfills, or they
may be recovered by other facilities. Soil contamination including some hazardous
wastes, spent catalysts or coke dust, tank bottoms, and sludges from the treatment
processes can occur from leaks as well as accidents or spills on or off site during the
transport process.